Popa & Associates Law Firm announces that on August 10, 2017 it lodged an application with the European Court of Human Rights (the “ECHR”) on behalf and in the interests of Mr Vlad Filat. The decision to apply to the ECHR was taken by Vlad Filat in the context of his unlawful conviction by Moldovan magistrates. 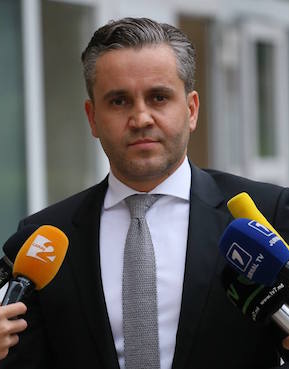 In his application, Vlad Filat complained about the violation of several rights guaranteed by the Convention for the Protection of Human Rights and Fundamental Freedoms (the “Convention”), namely: Article 3 of Protocol No. 1 in conjunction with Article 13 of the Convention, Article 6, Article 8, Article 18, etc.

Vlad Filat alleged that Article 3 of Protocol No. 1 in conjunction with Article 13 of the Convention have been violated by the Moldovan authorities. Although he was elected as a Member of Parliament in free and democratic elections, lifting of his immunity and revocation of the Parliamentary mandate were carried out in flagrant violation of domestic and international law.

The former Prime Minister and a member of Parliament has requested the ECHR to establish a violation of Article 6 of the Convention that provides for the right to a fair trial. In his application, Vlad Filat contended that his right to a fair trial was violated because of the lack of public hearings in his case. In this context, the applicant indicated: “I was the victim of a trial carried out in obscure and covert terms, and denied my right to communicate with the media [...]. No evidence was presented to suggest that a public hearing in my trial would affect the interests of justice”.

The right to a fair trial was also violated because most of the requests to examine witnesses and/or to conduct specialized expertise submitted by the applicant’s defense have been rejected by the trial judges without any specific motivation. Moreover, the principle of equality of arms with the prosecution has not been respected during the trial. At the same time, Vlad Filat complained to the ECHR that the trial judges failed to present the required guarantees to exclude doubts as to the lack of their impartiality.

Also, Article 8 of the Convention – the right to respect for private and family life – has been violated because several documents from the case-file were deliberately disclosed to the media. At the same time, throughout the trial, Vlad Filat repeatedly appeared handcuffed and excessively surrounded by masked Special Forces, which is contrary to the Convention and the ECHR’s case-law. This induced the public opinion and the trial judges the idea of Vlad Filat’s guilt. Thus, not only his private life, but also his public image was damaged.

The former Prime Minister also invoked Article 18 of the Convention in connection to the violation of all other rights provided by Article 3, Article 5, Article 6, Article 8, Article 13 and Article 3 of Protocol No. 1. The applicant argued that the whole proceedings against him have been unfair and constituted an abuse of rights. As regards, in particular, his pre-trial detention, he demonstrated to the ECHR that there was no real risk of absconding and that his detention was absolutely unnecessary. The real purpose of the applicant’s pre-trial detention was to remove him from public and political space. The applicant specifically complained about this to the ECHR.

Vlad Filat is represented in the proceedings before the ECHR by his lawyer, Mr Igor Popa. After the submission of the application, Mr Popa stated: “What happened in this notable case is a miscarriage of justice. It is regrettable that Vlad Filat did not have a transparent process and that the Moldovan courts permitted and endorsed a conveyor belt of illegal acts. The most striking is that Mr. Filat suffered severe damage and was illegally convicted while those who committed illegal acts in investigating this case are still not held accountable for their deeds. It is a matter of grave concern that until the ECHR examines the application, Vlad Filat will be still isolated from society and his loved ones. I am sure that in Vlad Filat’s case the truth will triumph,” Igor Popa said.

Given the seriousness of the alleged violations, the applicant requested the ECHR to examine his application as a priority.

It is recalled that in 2015, Vlad Filat already appealed to the ECHR (Filat v Moldova) complaining about his illegal arrest, detention and the unacceptable conditions of detention Penitentiary No. 13.

Click here to watch a video about this case.